After Capitol Police Missteps, Congress Looks the Other Way

The makers of the Glock boast that the pistol is “precisely engineered to meet the demanding specifications of military and law enforcement agencies worldwide.” It’s just the sort of item that should never find its way into the hands of a child.

Yet that’s exactly what happened on March 24.

A boy visiting Capitol Hill with his parents entered the bathroom of Speaker John A. Boehner’s suite and found a Glock. The weapon allegedly had been left there by a member of the Ohio Republican’s security detail.

It was a disturbing episode, particularly coming on top of two other instances this year when Capitol Police officers left their service weapons unattended, including one involving Senate Majority Leader Mitch McConnell’s security detail. The incidents raised new doubts about the leadership — and oversight — of the Capitol Police, which also has come under scrutiny for ignoring crimes in the streets surrounding Capitol Hill, poor communication and excessive overtime expenses.

Most troubling, however, is how both the police and their bosses on Capitol Hill responded.

The officers who misplaced their firearms received just a few days of suspension without pay — while the sergeant accused of leaking information about the incidents to CQ Roll Call has been on administrative leave since June. No major steps have been taken regarding how officers handle their firearms.

Officials with the Capitol Police, as well as House and Senate leaders, have also blocked disclosure of any more details of the gun incidents, repeatedly refusing to release the police reports.

Meanwhile, members of Congress have shown little interest in investigating. Their hands-off approach stands in stark contrast to how lawmakers treated security failures by the Secret Service and underscores how quick Congress is to sweep its own scandals under the rug.

Rep. Rich Nugent, a Florida Republican and former sheriff, is one of the few members who has taken a keen interest in the Capitol Police department, which he says is simply too cozy with the people it protects.

“As long as the speaker of the House or the majority leader of the Senate is happy, they don’t care,” he says.

Why are the members of the leaders’ security details who left their guns unattended still in place? 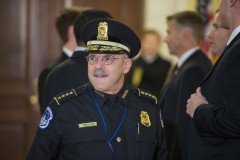 “Leadership likes them. They’re nice to them. You know, they probably take their luggage out of the car for them,” Nugent says. “That ingratiates themselves to leadership, so nothing’s going to happen. Nothing really is going to change.”

It’s somewhat remarkable that the public — including Boehner and McConnell — is even aware of the Capitol Police’s missteps.

After a worker at the Capitol Visitor Center found the gun lost by a member of McConnell’s detail on Jan. 29, a Capitol Police supervisor showed up to document the incident. Later that morning, the gun — allegedly left hanging out of a toilet seat cover dispenser — was back in the agent’s hands. He returned to his detail, and neither McConnell nor his staff was told of the episode.

The Capitol Police didn’t notify Boehner’s office after the March 24 incident when the boy, around 7 years old, found the gun.

GOP leaders only learned that their bodyguards walked away from their guns on the same week in May that CQ Roll Call published a story on the incidents, though they didn’t dwell on the matter.

“If you make a big deal out of the people you oversee having embarrassing, terrible lapses, political opponents will go after it,” says Norm Ornstein, a congressional expert at the American Enterprise Institute. “It fits with a long culture of Congress protecting its own.”

Police leaders bristled at the airing of their dirty laundry, which included a photograph of a Glock in the toilet seat cover dispenser. Though a Capitol Police spokeswoman said the department took the issue of abandoned guns seriously, the force’s leaders in fact immediately began hunting for the leak. The chief also asked the agency’s inspector general to investigate the source of the leaks. Top law enforcement officials say the leak disrupted an active investigation; they object to any references to a whistle-blower, claiming officials were not covering anything up.

It remains unclear whether there are any other cases of unattended guns, as the Capitol Police aren’t required to disclose such incidents to the public. Chief Kim C. Dine acknowledged during a May hearing that one supervisor who was aware of an officer leaving a firearm unattended did not notify the chain of command.

Eight months after the first incident, little has been done to prevent similar lapses by the roughly 1,700-member-strong force. Capitol Police say officers must watch a new training video on weapons handling — a response ridiculed by many, including late-night host Jimmy Kimmel, who joked that the force is “now undergoing potty training.”

Furthermore, the officers who left weapons unattended received no more than a six-day suspension without pay, according to law enforcement sources. Boehner’s and McConnell’s bodyguards, and a third officer whose service weapon was found in April by a janitor cleaning the Capitol Police headquarters building, remain on the job.

A sergeant interrogated as part of the force’s internal probe, however, has been on paid suspension since late June after allegedly being called in for questioning related to the photograph. The sergeant has hired an employment attorney, who would not comment. The department has declined to comment on all four matters, except in front of Congress, citing a policy of not discussing disciplinary action. It was a characteristic response from an organization that has provided no details on the incidents and can’t be compelled by sunshine laws to bring its activities into the open.

Jim Konczos, head of the union that represents Capitol Police officers, says he thinks a lot of these cases should be made public, even if that won’t be popular among rank-and-file officers. “Members, staff, the public — they have a right to know,” he says. “You’re a public servant.”

The questions that continue to swirl highlight a significant point: There is effectively no external oversight of the Capitol Police.

Two of the three slots on the Capitol Police Board, which oversees the force, are held by security officials appointed by congressional leaders. Boehner nominated House Sergeant-at-Arms Paul D. Irving in 2012, and McConnell announced in December 2014 that Senate Sergeant-at-Arms Frank J. Larkin would succeed Drew Willison, the former sergeant-at-arms who now serves as Nevada Sen. Harry Reid’s chief of staff.

Irving and Larkin, both career Secret Service agents, serve on the board with Architect of the Capitol Stephen T. Ayers, who was appointed by President Barack Obama in 2010.

The reaction in Congress has been decidedly muted. Asked in July whether the incidents concerned him, Boehner said, “I think these cases have been dealt with and decisions have been made in regards to sanctions on those individuals.”

After an armed intruder scaled the White House fence last year and dashed past the Secret Service before being apprehended near the East Room, outrage quickly escalated. Within three days, the House Oversight and Government Reform Committee hauled in the agency’s director for a rare recess hearing.

“To not do an investigation would be malpractice on our part,” Rep. Jason Chaffetz, a Utah Republican, said at the hearing.

Boehner and Minority Leader Nancy Pelosi of California called for an independent investigation.

After learning of the Capitol Police’s mishandled guns, Rep. Elijah E. Cummings of Maryland, the top Democrat on Oversight, said he would talk to Chaffetz, who had since become committee chairman, and that the panel might hold a hearing. “Just as we’ve looked at the Secret Service, again we have to put these folks under a high-powered microscope,” he said at the time.

Five months later, when asked why not, Cummings directs the question to Chaffetz.

“Believe me, I’ve got my hands full with the Secret Service,” Chaffetz, who at the time was running for speaker, explains. “I think people recognize that somebody did something very, very stupid, that it was dealt with appropriately.”

Cummings and other lawmakers, including New York Rep. Jerrold Nadler, a senior Democrat on the Judiciary Committee, also suggested Congress should reconsider a 2004 appropriations rider that shields Capitol Police from having to comply with Freedom of Information Act requests. Rep. Debbie Wasserman Schultz of Florida, the ranking Democrat on the Legislative Branch Appropriations Subcommittee, also signaled she was prepared to use Congress’ power of the purse to police the Capitol Police.

In the end, the spending bills from both chambers were silent about the incidents.

When Dine did testify on May 20 before the House Administration Committee, he said he “unequivocally” understood the concerns about the mishandled guns. “There are no excuses for these mistakes,” he added.

Dine also said he was considering increasing the minimum penalty to a 30-day suspension, or even termination, for a first offense going forward. “This is not offered in response to these incidents, but rather my belief that any liability type of violation warrants strict disciplinary action,” he said.

Still, Dine largely avoided disclosing any details about the three known incidents, and said anything else needed to be discussed behind closed doors.

There was even less talk on the other side of the Capitol. While Roy Blunt, a Missouri Republican who chairs the Senate Rules and Administration Committee, repeatedly stated his concern and promised to “stay engaged,” he never called a hearing.

Earlier this spring, the Capitol Police Board rejected a resignation letter from Dine and expressed confidence in his management despite a series of screwups.

During the 2015 State of the Union address, one of the biggest nights of the year for the Capitol Police, a high-speed car chase that ended without arrest left some on the force alleging a pattern of leaders discouraging officers from responding to crimes or making arrests before seeking approval from their supervisors.

After an April 15 stunt that ended with a gyrocopter landing on the West Front of the Capitol, lawmakers expressed concerns that members hadn’t received any real-time alerts about the incident.

Despite the mounting problems, lawmakers weren’t keeping too close an eye until the lost gun controversy. House Administration Committee members lamented during the May hearing that they had never before met the chief, who has been on the job since December 2012.

“We need to be sure that we are not an afterthought in the process of managing the department,” Robert A. Brady of Pennsylvania, the top Democrat on the committee, said at the time.

Brady now rejects suggestions that Congress didn’t conduct adequate oversight; he says he sat down with Dine in late July, “and a week later he resigned.”

Dine now appears to be leaving on his own terms. On Aug. 3, months after the controversy, the chief announced his plan to retire in January 2016, which was accepted.

This article originally appeared in the Oct. 19 issue of CQ Weekly.

Cozy With the Cops