For Senate Democrats, No Credit for Wage Proposal From Obama

In September, 15 Senate Democrats put pen to paper to urge President Barack Obama to issue an executive order raising the minimum wage for federal contract workers to $10.10. On Tuesday, they'll get exactly what they wanted from Obama — except for any recognition of their efforts.

Of the 15 lawmakers on the letter, championed by Sen. Bernard Sanders, I-Vt., four senators are up for re-election in 2014: Edward J. Markey of Massachusetts, Jeff Merkley of Oregon, Jack Reed of Rhode Island and Brian Schatz of Hawaii. 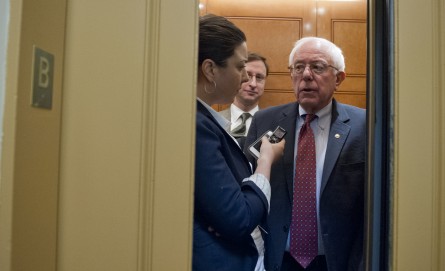 And though Democrats in the White House and in Congress have been touting a stronger relationship than ever heading into Tuesday night's State of the Union, there was some residual frustration that the White House apparently didn't consider mentioning the letter or the senators in its announcement of the policy change . Democratic aides approached for this story did not want to be quoted on the record about senators' displeasure, largely out of worry they would upset administration officials.

"Since when does the White House give credit to other Democrats?" one Senate aide quipped.

When asked by Roll Call whether he was frustrated that the White House didn't mention the group of Democratic senators and their push for higher wages, Sanders smiled a wide grin, then paused.

"I am delighted that the president came forward with his very, very important initiative. It's going to help hundreds of thousands of low-wage workers," Sanders said, wryly.

You can read the original letter from the Senate Democrats here.