ST. GEORGE ISLAND, Fla. — Former Florida first lady Adele Graham does not entertain the word “if” in polite conversation, at least when discussing the political future of her daughter Gwen. It’s only “when.”

The wife of ex-Florida governor and senator Bob Graham treats doubt that Gwen Graham will oust Republican Rep. Steve Southerland II with a gentle arm pat and tone of voice usually reserved for obscenity or wearing white after Labor Day.

The Graham family has summoned the force of its political operation behind its eldest daughter to ensure its 50-year Florida political win streak does not end in November. But while the Grahams spent three decades dominating statewide politics, the Southerland family also has deep ties in the district.

“When Grahams run, Grahams win,” the candidate tells her supporters at a Saturday afternoon meet-and-greet on this north Florida coast barrier island.

But this is a tough district and environment for any Democrat, even a political scion. President Barack Obama’s plummeting approval rating make it that much harder this year for House Democratic candidates to gain traction.

Southerland and Mitt Romney each carried Florida’s 2nd District by 6 points in 2012. And geographically, this seat has more in common with Alabama than Miami.

To combat that reality, a Southern Democrat must create an outsized personal brand that will help voters forget any association with the president.

Despite the grim environment , defeat is an unfathomable concept to Graham clan, possibly because they have litle idea what losing feels like. With the exception of Bob Graham’s failed 2004 presidential bid, the Grahams have never run an unsuccessful political campaign.

Bob and Adele Graham have relocated to Tallahassee from their Miami-area home for the last two months of the election and are constant presences on the trail. As a result, Gwen Graham’s House campaign operation has the feel of a rock band’s reunion tour.

At the Saturday event here, Bob Graham introduces his daughter and previews one issue dominating the campaign: gender. Female politicians have "an innate ability to check the ego at the door," he says.

The country desperately needs bipartisan leaders, he says, adding, "If that person happened to wear a dress, so much the better." 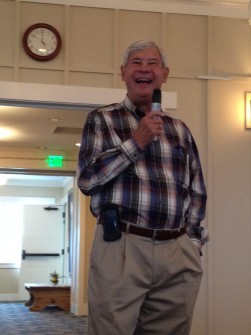 The former senator is regularly out stumping for his daughter. (Abby Livingston/CQ Roll Call)

On the trail, Gwen Graham eschews the alliterative nature of her full name on campaign signs. They simply state “Graham for Congress.”

And even though Bob Graham left politics in 2005, Florida Democrats say he and his wife never stopped sending handwritten notes, holiday cards and presents.

So when Gwen Graham decided to run, she had a vast political and financial network at her disposal. The result: she's raised $500,000 more than Southerland.

State and national Democrats say they saw the earth shift for them over the summer, when Graham deployed her fundraising advantage to air eight weeks’ worth of unanswered television ads. By August, polls showed a tight race .

Over in Panama City, the Southerlands do not have the same statewide presence. Even so, they are a formidable local brand in the western side of the district.

Southerland often brags about his “ten thousand cousins” in the area and how the family’s roots trace back 200 years.

It doesn't hurt that for three generations, the family has run Southerland Funeral Home. Since 1955, the congressman and his family have been there to comfort area residents on the worst days of their lives.

While he struggles at times to stay on message, he is a strong retail politician, thanks in part to interpersonal skills he honed over the years as a funeral director.

"You'll see today, you'll see us hug necks of people of all walks of life," he tells CQ Roll Call in an interview. "The burden to help people was really instilled in us and was groomed inside of that little funeral home."

At a Saturday morning campaign rally just a short walk from the Gulf of Mexico in Panama City Beach, the Southerlands warmly descend upon anyone approaching the event.

It was a rare overcast day in the Sunshine State, but Southerland is all smiles as he worked the crowd. He shakes hands, gives out hugs and calls out to friends on his way to the amphitheater stage: “Hey there, brother!”

During Southerland’s speech, an attendee shouts, “Steve for president!” 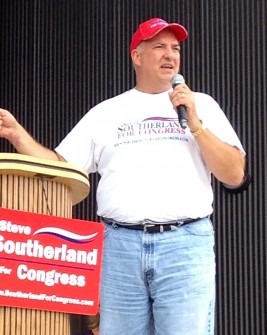 The congressman delights the crowd when his stump lines morph into a rendition  of Ben E. King’s “Stand By Me.”

At this event, Southerland is both singing and preaching to the choir.

His only chance for electoral survival is to run up the vote here. Likewise, Graham must dominate in her home base of Tallahassee. And the margin will likely be determined in the district’s sprawling rural areas.

It’s late in the campaign season, and the Grahams and the Southerlands are getting under each other’s skins.

Southerland often reveals annoyance with the Graham storyline. In a July interview , he downplayed the family's relevance in modern Florida politics.

At the rally, Southerland wishes his own father a happy birthday. "Nobody, and I mean nobody ... nobody has got a better dad than me," Southerland says pointedly. "Maybe the writers here can get this straight, because you have not seen one article — not one — that didn't include my opponent's dad."

Adele Graham sharply fires back against her daughter's rival, and expresses dismay with old allies in Tallahassee who have Southerland signs in their front yards.

“That’s been hard for me because these are people we’ve known for so many years and I wonder why?” she says. “I can’t comprehend that.”

But in the end, the candidates — not their families — appear on the ballot.

Gwen Graham often is cited as the best House challenger in the country, so much so that this district is one of the few places Democrats have serious hope of carrying in November.

When asked about the best advice her father has given her over the course of the campaign, she gives a nod to her father, seated nearby.

"Well, since he's seated right behind me ..." she says, laughing.

Then she adds, "To just be true to yourself."

Related stories:  Ex-First Lady of Florida Fires Back at Congressman Southerland Sings 'Stand by Me' (VIDEO) The 10 Most Vulnerable House Members New Democratic Poll Shows Florida Congressman in Peril Congressman Says Gwen Graham’s Dad ‘Not on the Ballot’ Campaign Spotlight: Father Pitches Best (Video) Roll Call Election Map: Race Ratings for Every Seat Get breaking news alerts and more from Roll Call in your inbox or on your iPhone.

Save for later
Topics: fla-2 florida house-2016 on-the-road-2 Roll Call on the Road