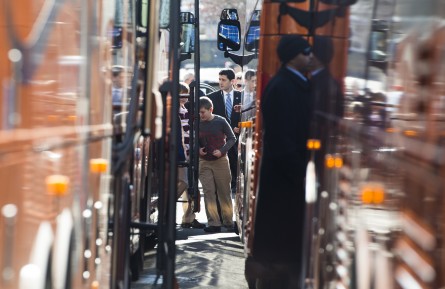 Speaker Paul D. Ryan, R-Wis., turns 46 years old Friday. What's he doing to celebrate? He's in Florida working to retain the House majority so he can push a bold agenda in 2017 with a Republican president, according to his office.

At the age of 45, Ryan became the youngest Speaker the House since 1881. Five weeks after former Speaker John A. Boehner announced his retirement,  Ryan was elected speaker on Oct. 29.

That year, Ryan also grew a beard , watched his first State of the Union from the seat behind the president and told HOH there’s “not a lot ” he missed about Washington while he was home over winter recess.

Ryan was born in Janesville, Wis., in 1970, one of four children born to Paul Ryan Sr., who died when Ryan was 16, and Betty Ryan. Ryan married his wife, Janna, in 2000, one year after his first year as a congressman.

See photos, follies, HOH Hits and Misses and more at Roll Call's new video site. Get breaking news alerts and more from Roll Call in your inbox or on your iPhone.