Lofgren tried to get changes made to the GOP refugee bill due on the floor Thursday. (Bill Clark/CQ Roll Call)

Updated 6:15 p.m. | House Democrats will use procedural gambits to get a vote on their proposal aimed at easing concerns about Syrian refugees coming to the United States but without completely blocking their resettlement.

The partisan maneuvering has the potential to weaken support for a Republican-backed bill set to come to the floor Thursday. President Barack Obama has threatened to veto the measure, but the bill is expected to pass with GOP votes and some from fiscally conservative Democrats.

Democrats said they attempted to negotiate Tuesday with Republicans on a bipartisan bill responding to the Nov. 13 terrorist attacks in Paris carried out by affiliates of the Islamic State.

But those efforts fell flat, with the GOP offering legislation that would add layers to the screening process before refugees are allowed into the country.

The bill would require the Homeland Security secretary and directors of the FBI and National Intelligence to sign off on certifications of all refugees coming from Syria and Iraq. Democrats argue the requirements are too onerous and tantamount to shuttering the refugee program entirely.

“It would close the program down for two years, if not more,” said Rep. Zoe Lofgren, D-Calif., ranking member of the Judiciary immigration subcommittee.

Minority Leader Nancy Pelosi hosted Speaker Paul D. Ryan at a meeting Wednesday in her office, where she asked the Wisconsin Republican to consider letting Democrats offer a substitute amendment to the underlying bill. Ryan refused, according to a House Democratic aide familiar with the meeting.

"The Democratic Leadership will be able to offer an alternative as a Motion to Recommit, as they are always allowed," Ryan spokeswoman AshLee Strong said in a statement to CQ Roll Call. "We are working in good faith to find a solution that ensures America is both a compassionate and safe country, and we hope the Democratic leadership joins us."

Democrats are now likely to force votes during floor debate to disrupt consideration of the Republican bill, which combines proposals by Homeland Security Chairman Michael McCaul of Texas and Rep. Richard Hudson of North Carolina. A "motion to recommit" or ordering of "the previous question" would allow Democrats to register votes for their alternative.

That proposal drafted by Lofgren and Rep. Bennie Thompson of Mississippi, the ranking Democrat on the Homeland Security Committee, would only require DHS to certify refugees. The department would also be able to deny U.S. entry to a refugee of any country whose identity can't be verified through federal databases.

Lofgren and Thompson were in touch late Tuesday with their GOP counterparts to suggest modifications to the GOP bill. Lofgren told CQ Roll Call they sought different ways to tighten the refugee vetting process hampering the United States’ ability to admit asylum seekers. 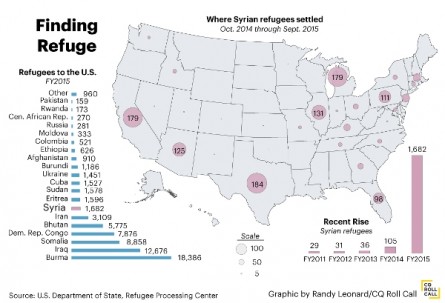 At least one of the Democratic suggestions was included in the GOP text, according to a Republican aide familiar with the discussions. That appears to be a provision requiring the DHS inspector general to conduct an annual risk-based assessment of refugee certifications and report findings to Congress, which is included in the GOP bill and Democratic alternative.

“If they really wanted a bipartisan bill, they didn’t act like it,” Lofgren said.

A senior GOP aide described the Democrats’ version of events as “not entirely accurate.”

The GOP bill won the endorsement Wednesday evening of the 15-member Blue Dog Coalition, a group of fiscally conservative Democrats.

Rep. Brad Ashford of Nebraska, a Blue Dog member, was the first Democrat to co-sponsor the bill. Jeremy Nordquist, Ashford's chief of staff, told CQ Roll Call Wednesday the congressman did not want to suspend the refugee program but wanted "to make sure we’re addressing the security concerns of our constituents.”

Republicans were insistent Wednesday they had not kept Democrats out of the process.

The bill “is designed to attract huge numbers of Republicans and huge numbers of Democrats,” said Rules Committee Chairman Pete Sessions. “The average citizen will see this vote for what it is — and it’s not politics.”

Among conservatives, Heritage Action for America is slamming the McCaul-Hudson bill for not truly constituting a "pause" in admitting refugees from Iraq and Syria who are fleeing the extremist group also known as ISIS or ISIL.

With the prospect of more bills coming to the floor to address security concerns stemming from the Paris attacks, it appears many GOP lawmakers are prepared to accept their leadership’s refugee proposal.

“It’s better than the status quo, but I don’t think we finish there,” said Rep. Matt Salmon, R-Ariz., a House Freedom Caucus member.