About half of young voters "probably" won't watch convention coverage

Save for later
Heading into the Republican convention in Cleveland next week, the two presumptive nominees, Republican Donald Trump and Democrat Hillary Clinton, still find themselves locked in a tight contest.

While most American voters in a recent YouGov/Economist poll said they plan to catch at least some of the convention coverage, younger voters are less likely to tune in.

Around half of voters under 30 said they “probably” won’t watch the action in Cleveland from July 18-21 or Philadelphia, where the Democrats meet July 25-28. Among older voters, more of them plan to watch the GOP convention than the Democratic one; the reverse was true among the under-30 crowd. 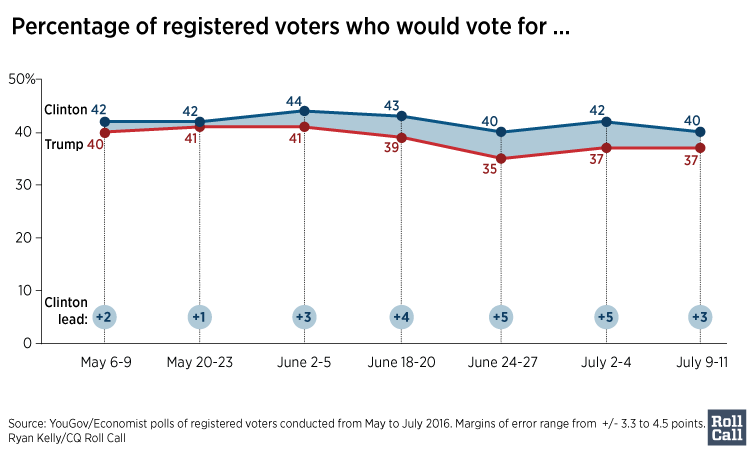 Clinton has maintained a slim but consistent edge over Trump in YouGov/Economist polls since at least early May.

The most recent poll of registered voters, conducted July 9-11, gives the former secretary of state a 3-point edge over the real estate mogul, 40 percent to 37 percent. This marks a decline from a week earlier, when Clinton led Trump by 5 percentage points — her biggest lead in the last seven polls.

The recent negative publicity over the FBI investigation into her mishandling of classified emails during her stint at the State Department may have taken a toll.

Still, Trump has been unable to make significant inroads into Clinton's advantage over the last two months. He is yet to tie or exceed her vote percentage in a single YouGov/Economist poll since May.

The polls, conducted from May through July, had margins of error that ranged from 3.3 to 4.5 percentage points.

Get breaking news alerts and more from Roll Call on your iPhone or your Android.
Get Permissions