It's well-documented that Speaker Paul D. Ryan's success depends on his ability to work with the Republican Conference's right flank, but that's just the half.

For any legislation to advance to the president's desk, the Wisconsin Republican must also find common ground with Senate Majority Leader Mitch McConnell, R-Ky. It's not as much a personality issue as it is congressional math, and that means balancing the desires of conservative hardliners with McConnell's reality of needing at least six Democratic votes to clear anything for the president's signature. Senate Majority Whip John Cornyn, R-Texas, who is no stranger to the far-right's ire, is optimistic. He said Ryan seemed like "the one guy" who could unite House Republicans on legislation that has a chance in the Senate.

“Hopefully some people in the ‘Hell No’ caucus will realize that they can’t continue to sustain that position and have a functioning majority," Cornyn said in a brief interview. "And so I hope this represents a little bit of a transition."

Ryan must prove himself soon, as an omnibus spending measure must be agreed to before the Dec. 11 deadline to avoid a government shutdown.

Ryan has already expressed a willingness to revisit the legislative process and to be more inclusive of rank-and-file members, a major sticking point for the conservative House Freedom Caucus. Having chaired both the Ways and Means and Budget committees, his policy expertise provides immediate credibility in the conference, said Ron Bonjean, a Republican strategist and former spokesman to both a speaker and Senate majority leader.

“While structurally, it’s true the speaker will need to bring on 15 or some odd Republicans and the Senate Republican leader will need some Democrats," Bonjean said. "Ryan is particularly suited for a number of these high stakes battles, because he has such a strong policy acumen that can help him bring over some individuals that might not have been brought over."

On larger, must-pass legislation, former Speaker John A. Boehner, R-Ohio, had to rely on Democratic votes. While Ryan still has to deal with the vote-counting realities in both chambers, observers say if anyone can unite the conference and govern, it's him.

Former Senate Majority Leader Trent Lott, R-Miss., said he is "optimistic" about a Ryan speakership, and said hiring David Hoppe as chief of staff will help the new speaker gauge the Senate. Hoppe knows Congress, having previously served in top posts to both House and Senate leaders, and he has close ties to McConnell's chief of staff, Sharon Soderstrom. 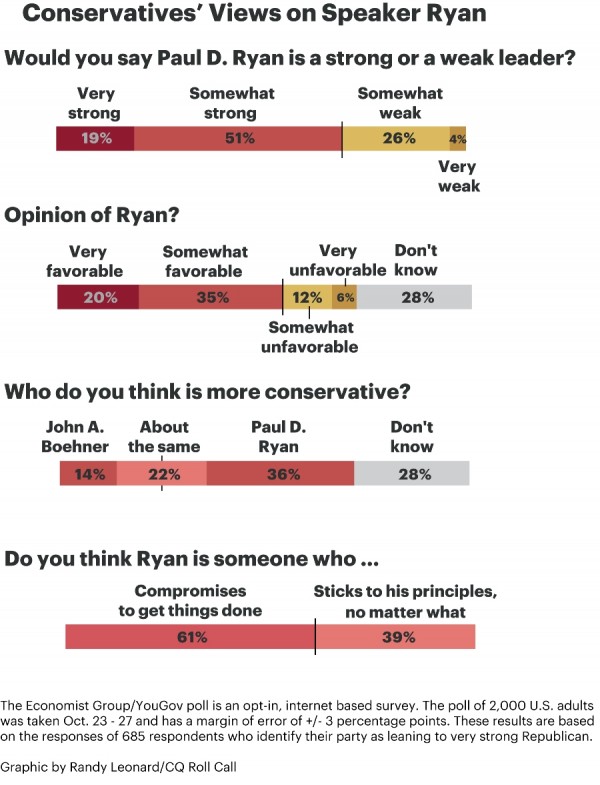 For all his optimism, Lott conceded Ryan may still have issues dealing with the HFC, which, along with right-wing media and outside advocacy groups, touts collecting the pelts of other House Republican leaders.

"I do think that Paul needs to stare these turkeys down a bit," Lott said. "A leader is only as good as his followers ... and I think [Ryan] has got that ability. He’s got the disposition to tell them what they need to hear without pissing them off, I think. I’m counting on it. But, it’s a hard job.”

Ryan is well-regarded on both sides of the Rotunda and both sides of the aisle. He played a central role in ushering trade legislation through Congress in June, which was considered a win for both Republicans and President Barack Obama. While never enacted and loathed by Democrats, Senate Republicans revered the Ryan budget.

He can work with Democrats, too. In 2013, Ryan kept Senate Republican leadership in the loop while negotiating a spending deal with Sen. Patty Murray, D-Wash., earning high praise on both sides of the aisle.

Sen. Charles E. Schumer of New York, who will likely take over as Democratic leader in 2017, probably best summed up how Democrats feel about Ryan — optimistic about negotiating with him while still reticent of his conservative vision for the country.

"Every time I've dealt with him, he's been straightforward, he's been honorable, and he's been willing to compromise," the New York Democrat said. "When I look at his budget, I say, 'Yikes.' You know, privatizing Medicare, Social Security, decimating the whole federal government."

Related: Paul Ryan Elected Speaker of the House Democrats See Same Pitfalls for Speaker Ryan See photos, follies, HOH Hits and Misses and more at Roll Call's new video site. Get breaking news alerts and more from Roll Call in your inbox or on your iPhone.