The Congressional Progressive Caucuses trolled the White House Monday after the legal memo justifying the killing of Americans was partially released by court order: 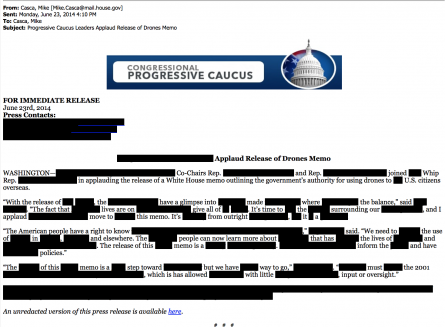 New Press Secretary Josh Earnest defended the earlier decision not to release the memo to the public.

"We worked with — through the legal system and those who are most interested in seeing it to produce a redacted document, that redacted national security interests while at the same time trying to live up to our commitment to transparency that the president has talked about quite a bit. So I think in this case — I think even the groups that sharply criticized us would call this a win for transparency."

The actual press release was more pedestrian, but noted the Progressive Caucus has been pushing for transparency on drones.

WASHINGTON—Congressional Progressive Caucus (CPC) Co-Chairs Rep. Raúl M. Grijalva (D-AZ) and Rep. Keith Ellison (D-MN) joined CPC Whip Rep. Barbara Lee (D-CA) in applauding the release of a White House memo outlining the government’s authority for using drones to kill U.S. citizens overseas. “With the release of this memo, the American people have a glimpse into decisions made in our name where lives hang in the balance,” said Rep. Grijalva. “The fact that American lives are on the line too should give all of us pause. It’s time to end the secrecy surrounding our drone policies, and I applaud the administration’s move to release this memo. It’s a far cry from outright transparency, but it is a good first step.” “The American people have a right to know their government’s justification for the use of force abroad,” Rep. Ellison said. “We need to restrict in the use of drones in Yemen, Pakistan and elsewhere. The American people can now learn more about a program that has claimed the lives of innocents and damaged our reputation abroad. The release of this secret memo is a victory for transparency. But more must be done to inform the public and have accountable policies.” “The release of this secret memo is a good step toward transparency but we have a long way to go,” Rep. Lee said. “Congress must repeal the 2001 Authorization for Use of Military Force (AUMF), which is has allowed endless war with little Congressional debate, input or oversight.” The Congressional Progressive Caucus has led the way on transparency in the U.S. drone program, holding an ad-hoc hearing last summer and endorsing legislation to bring the legal reasoning behind the drone program into the light.